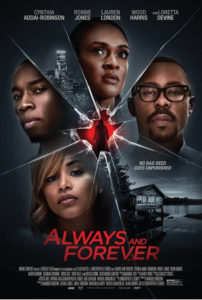 Synopsis: After a tragedy reunites Nicole with her childhood friends, they each find themselves in danger, targets of a deranged stalker. Nicole knows this can’t be a coincidence. The secrets of their past are coming back to haunt them.

Note: Confusing. S&A has this film as being a new release and IMDB as released on May 5, 2018. Youtube’s trailer is from February 2019. So maybe this is an old movie just being released in theatres now.  Premiered at the Toronto Black Film Festival on February 16, 2019. Original title “Always & 4Ever”.