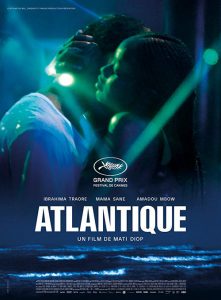 Synopsis: Along the Atlantic coast, a soon-to-be-inaugurated futuristic tower looms over a suburb of Dakar. Ada, 17, is in love with Souleiman, a young construction worker. But she has been promised to another man. One night, Souleiman and his co-workers leave the country by sea, in hope of a better future. Several days later, a fire ruins Ada’s wedding and a mysterious fever starts to spread. Little does Ada know that Souleiman has returned. READ REVIEW

Note: Also known as “Atlantique” and “Fire Next Time”. Premiered at the Cannes Film Festival on May 16, 2019. Above is the Netflix premier date. I need to see the film to better identify people. Based on Diop’s 2009 short film, Atlantique. Mariama Gassama does not appear in the IMDB cast list but showed for the actor’s photo call and the press conference at Cannes. Release date changed from November 27, 2019 to November 29, 2019.