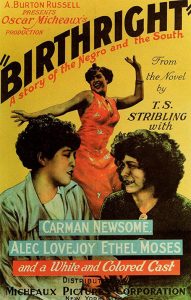 Synopsis: Remake of Micheaux’s 1924 Silent Film. The movie tells the story of a White man who took an interest in a young colored youth, took him into his home and tried to give him every advantage that a white boy would have. As the story takes place in a small Southern town, quite a bit of talk was caused. Then the boy wanted to marry Ethel Moses, and the white man tried to stop it” — review in the Philadelphia Afro-American, 3/11/39