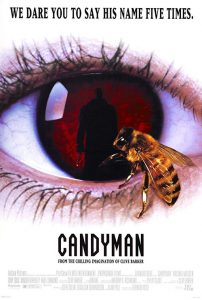 Synopsis: The Candyman, a murderous soul with a hook for a hand, is accidentally summoned to reality by a skeptic grad student researching the monster’s myth.

Note: IMDB has two people listed playing the same baby (Latesha and Lanesha Martin). Also, I think there are different versions of this movie. IMDB lists Michelle Blackwell as being cousin Regina. The version of the film I saw has no cousin Regina and that character is not listed in the credits. But when Helen is talking to the cleaning ladies, one of them does mention her cousin Regina that lives in Cabrini Green. Helen goes there with Bernadette but they talk to Anne-Marie, the neighbor.