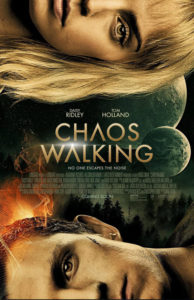 Synopsis: From Carnegie Award-winning writer Patrick Ness comes the story of Todd Hewitt who lives on the distant planet of New World-a new hope for humanity until struck by “The Noise,” a virus which inflicts immersive visions of ones’ every thought. The cacophony drives many mad until Todd makes a hidden, silent discovery: there is a girl named Viola, who may be the key to unlocking New World’s many layered secrets. Together, the two unlikely companions are forced on a white-knuckle adventure into an unexplored planet – trying to escape and hide in an environment where all thoughts are heard, all movements are seen -as they both discover the truth about the lives they left behind and the spectacular world they’ve learned to call home.