Charlie Chan in the Secret Service (1944) 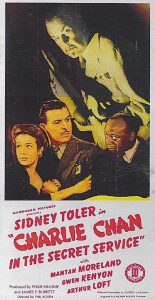 Synopsis: A scientist working on an important new invention which will protect Allied shipping from U-boat torpedoes has been assigned Secret Service security protection. Amazingly, despite the fact that his laboratory and experiments are located on the upper floor of his Washington mansion, he decides to host a cocktail party for friends on the first floor. Even though several of his guests are foreign nationals with shadowy pasts, he refuses to allow his bodyguards to attend because their presence might offend them. When he is killed by unknown means before joining them, the resultant summary investigation includes Honolulu detective Charlie Chan and children Tommy and Iris, later joined by Birmingham Brown, the chauffeur of one of the guests. When a preliminary autopsy reveals the scientist was electrocuted, Charlie and his associates must decide which of the suspects and red herrings is the guilty party.