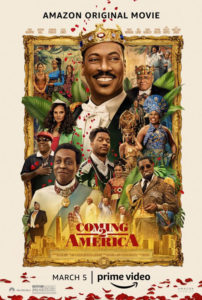 Synopsis: Prince Akeem learns about a long lost son, and must return to America to meet his unlikely heir to the throne of Zamunda.

Note: Jonathan Levine was first announced at director but looks like he was replaced by Craig Brewer. The film is not currently listed on IMDB but they are hoping to begin production in 2019. The release date was pushed back from August 7, 2020 to December 18, 2020 to make room for Antoine Fuqua’s “Infinite“. This project is said to be moving from Paramount to Amazon (if Eddie Murphy approves). The December 18 release date was changed to March 5, 2021. Nyisha Bell and Wizkid, were in the original cast list but not in the current one.