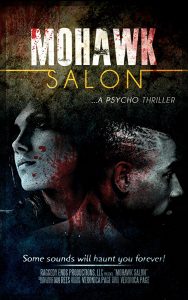 Synopsis: It’s up to Chicago detective Sam Mitchell to solve the ongoing serial murders of dozens of Afro-American hairdressers, whose scalped remains are being hung like trophies to their salon mirrors. As a rookie in the late 1970s, Sam covered a grisly crime scene in Harlem, where a Native American woman was murdered and scalped, her baby missing. That case was never solved. Is the troubled Black cop up to the task of restoring order to the city?

Note: No ideas what’s up with this film. It was suppose to be released in 2015 as Mohawk Salon: A Psycho Thriller but now the name is changed, it’s listed as in development and not to be released until October 2017. I checked on the status again and found their official site but with the first film still unreleased it looks like they are raising money to complete or distribute that film and a sequel. If no update by October, I’m moving this to “Lost Films”.

Well it’s October 19, 2017 and the project is still listed as in-development so I’m moving it to lost. If it gets updated I will move it back to active.