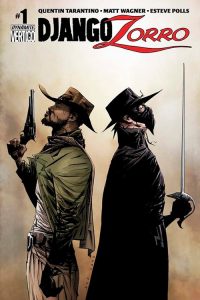 Synopsis: Based on the comic book series by Quentin Tarantino, the story takes place several years after the events of Django Unchained. Django is still a bounty hunter, and since there’s a warrant on his head back east, he has mainly been plying his trade in the western states. After safely settling his wife, Broomhilda, near Chicago, he takes to the road once again, sending her funds whenever he completes a job. It’s by sheer chance that he encounters the aged and sophisticated Diego de la Vega — the famed Zorro — and soon finds himself fascinated by this unusual character, who can also hold his own in a fight. It’s not long before Django becomes Diego’s ‘bodyguard’ and joins him on a mission to free the local indigenous people from slavery.