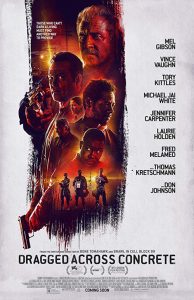 Synopsis: A stolid, old guard policeman and his volatile younger partner find themselves suspended when a video of their strong-arming tactics become the media’s special du jour. Low on cash and with no other options, these two embittered soldiers descend into the criminal underworld to gain their just due, but instead find far more than they wanted awaiting them in the shadows.

Note: Premiered at the Venice Film Festival on September 3, 2018. Missing trailer. Above are the red carpet interviews at Venezia 75. The movie was suppose to be released in theatres (in Russia) on November 29, 2018 but it was moved back. There is finally a US release date and a trailer.