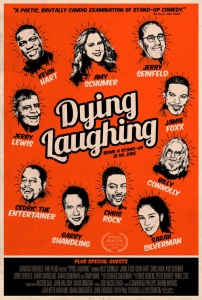 Synopsis: Whilst painters, writers, musicians even dancers are talked about as Artists, stand-up comedians are often regarded as mere entertainers – yet their work has possibly more direct effect on an audience than any other art form. These are social and cultural commentators who at their best can change the way we think about important matters whilst making us howl with laughter. A stand-up comedian must be the writer, the director and the star performer, and unlike any other performance there is no rehearsal, no practice, no safety net, the stand-up can only work in front of a live audience – with feedback being instantaneous and often brutal. For most people baring their soul to then have an audience boo or heckle them would be a life-changing trauma, for stand-ups it’s a weekly challenge. DYING LAUGHING is a unique glimpse into the agony and ecstasy of performance along with an singular examination into the day-to-day life of a professional stand-up.