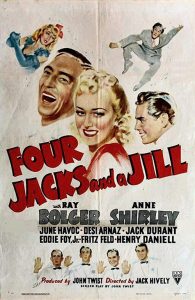 Synopsis: Four struggling musicians lose their vocalist at the insistence of her gangster boyfriend. They find a replacement in an innocent young woman being courted by a cabbie pretending to be a king.

Note: I didn’t find a trailer. Above is a clip from the film. I need to see a higher res version of this film to do a capture of the shoe shine boy who is uncredited in the beginning of the film.