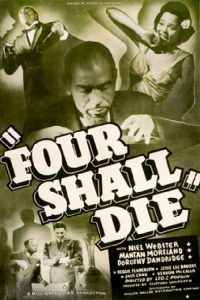 Synopsis: Helen Fielding, heir to the fortunes of the late millionaire Roger Fielding, Sr., has broken off her relationship with the unscrupulous Lew Covey to pursue a romance with reporter Bill Summers. Covey, determined to get at Helen’s inheritance, vows to win her back. When Hickson, a friend of Helen’s, tells Dr. Hugh Leonard and Covey about a visitation he had from his dead mother’s spirit, Covey expresses disbelief and bets Hickson that he cannot prove the visitation took place. Hickson accepts the bet, and leads the men into Dr. Ronald Webb’s spiritualistic parlor. There the voice of “Momba,” an angry spirit, warns Covey that he will die later that night. The spirit also portends the deaths of Hickson and Leonard, telling them that they will die one day apart from each other following Covey’s death. The ghost of Roger Fielding, Sr., the next apparition, tells his son, Roger Fielding, Jr., to prepare for his death. Later that night, Helen discovers Covey’s dead body in her room. Bill is suspected as the killer, but Hickson believes that the spiritual portents drove the young man to suicide. Hickson, Bill and the others agree to keep the police ignorant of the death, and instead call on the famous detective Pierre Touissant and his assistant, Beefus, to help them solve the case. The following night, Hickson dies of a gunshot wound during a violent quarrel with a man named Jefferson. Hoping to flee from his predicted death, Roger takes the advice of Webb and sets sail for Argentina with a satchel containing $100,000. Touissant and Beefus prevent his departure, however, and return him to the Fielding home. There Touissant exposes Webb and his plot to get at the inheritance money by frightening Roger with fake apparitions and fake murders. A short time later, the police sergeant arrives with Covey and Hickson, who are very much alive, thus proving true Touissant’s explanation.

Note: Aka “Condemned Men”. I didn’t find a clip or trailer for this film. I also searched WorldCat.org with no results. I’m moving this film to lost. Too bad, it looks interesting. IMDB has Pierre Touissant being played by Niel Webster (like it says on the poster) but TCM has the role played by Pete Webster. I already have a Pete Webster in my database and can’t find info in Niel Webster, so I’m going with the Pete name. I wasn’t able to identify Earle Hall. The only other film he appeared in (One Dark Night (1939)) is also lost and i haven’t been able to find the episode of the Garry Moore show that he appears on.