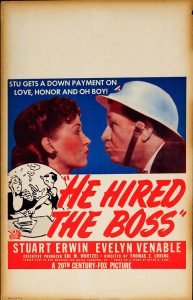 Synopsis: Hubert Wilkins, a bookkeeper for Mr. Bates by day and an air raid warden by night, patrols the district where his boss’ warehouse is located, and finds two employees removing raw silk stocks. They say they are working under Bates’ orders and brush him off. Hubert wants to marry Emily Conway, company secretary, but can’t see how he can afford it since he has loaned a salesman, Fuller, $400 with deeds to four lots as security. Don Bates, son of the boss, is engaged to Emily’s sister Sally though his father disapproves. He and Emily encourage Sally and Don to elope. Hubert, a little tipsy, buys two more lots from Fuller and goes to Bates’ home and asks for a raise. He is fired and, the next morning, Emily also for helping Don to elope. Hubert discovers that the lots he bought are worth $100,000 and, unknown to Bates, buys the company. While on warden duty that night, he discovers that the two employees he previously saw taking silk from the warehouse are actually stealing it.

Note: Mantan only appears in the beginning of the film, for a brief moment, as the shoe shine boy.