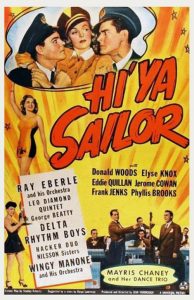 Synopsis: Bob Jackson and his three Merchant Marine shipmates have each invested $50 in a song Bob has written and which he thinks will be published for a fee of $200. In a taxicab driven by Pat Rogers, they search for the publisher’s office but finally realize they have been swindled. Plus, they now owe Pat a large taxi-bill. They go to a serviceman’s canteen where a noted singer, Annabelle is performing. As she leaves she drops an expensive cigarette-case which is picked up by Pat. She tells Bob to return the case and pay the cab-fare from an anticipated reward. At the night club where Annabelle is appearing,(along with the very female Mayris Chaney and HER Dance Trio) Bob’s intentions are misunderstood and a brawl ensues.