That was what Terrence Howard brought to the role of Mr. Blonde, the casually homicidal madman of Quentin Tarantino’s Reservoir Dogs in a one-night-only live-reading of the script last night.

Now picture an older guy, who probably should be thinking about retirement, but realizes too late he has thrown in with the wrong thugs – and he left his medication at home. That was what Laurence Fishburne did with the part of Mr. White, originated by Harvey Keitel.

Up in the Air and Young Adult filmmaker Jason Reitman has been creating these events for the past five months, with one more to go in the series. This time around, he decided to take a movie that once featured an all-white cast and replace it with an entire group of black actors (with one exception.)

Though the event is not recorded, EW has this to share from the cinematic experiment …

Film critic Elvis Mitchell, who helps curate the Los Angeles Couty Museum of Art events through Film Independent, introduced the proceedings with: “Happy Black History Month, everybody!” He was wearing a tweedy jacket, but it seemed to be a little ill-fitting. After a moment he said, “Something’s wrong …” and disappeared backstage.

When he returned to the microphone, it was wearing a familiar outfit – the black suit and skinny tie of the Reservoir Dogs crooks. “There! That’s better,” he said. “Everybody looks better in black, right?” 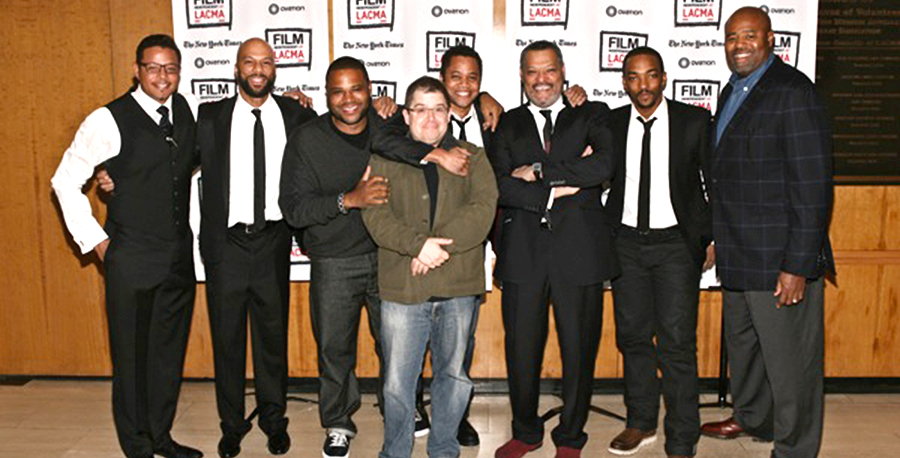 In a way, that was the question of the evening: would the performance be better, different, or basically the same by changing the color of the actors? A little over a week before the performance, Reitman told EW he wasn’t really sure what would happen.

Mitchell theorized that this was just taking the source material back to its roots. Much like rock ‘n’ roll began with music from people of color, he speculated that Tarantino – a connoisseur of ’70s blaxploitation cinema – found inspiration there with his own debut script. “If you were an African-American and saw this movie when it came out, you probably thought, ‘What …? These guys all sound like black dudes!’”

Mitchell characterized it as “the 99 percent black version of Reservoir Dogs.” He laughed. “Because, if you’re African-American, you know … there’s always that 1 percent nobody wants to tell you about in the family!”

The outlier – Patton Oswalt, a staple of Reitman’s readings who previously played the Wallace Shawn role in The Princess Bride, and the Anthony Michael Hall role in The Breakfast Club, among others. Oswalt played, appropriately, the only major black character in the film: Holdaway, the mentor for Tim Roth’s undercover cop, who was originally played by Randy Brooks (a black actor.) Oswalt also did the K-Billy Supersounds of the ’70s voice-over, among other bit parts.

Along with Fisburne and Oswalt, a few other actors were kept under wraps until the performance began: Rapper Common as both Mr. Brown (originated by Tarantino) and the tortured cop Officer Nash (originated by Kirk Baltz), and Chi McBride as the heist boss Joe Cabot, originated by the late Lawrence Tierney.

At times, McBride’s performance was eerily reminiscent of the fearsome Tierney, right down to the voice and posture, though he brought a warmth that the original actor (who was arrested for shooting a gun at a neighbor during the production) had a hard time faking.

Anthony Mackie took on the iconic part of Mr. Pink, but instead of the movie’s leering creepiness brought a sense of comic panic to the role – more Don Knotts than Steve Buscemi, but a fresh and funny take nonetheless, especially when joined for so many scenes by the exasperated grumpiness of Fishburne’s Mr. White.

Anthony Anderson was Mr. Nice Guy as the appropriately named Nice Guy Eddie, the son of Joe Cabot who helps orchestrate the heist and knows all the major players. He seemed to especially savor his character’s monologue about the differences between white and black women, which definitely played as more admiring than sneering, as it did in the movie coming out of the mouth of the late Chris Penn.

The kind of casually racist dialogue the murderous characters occasionally use, while jarring initially, got plenty of laughs – from the audience and actors alike. 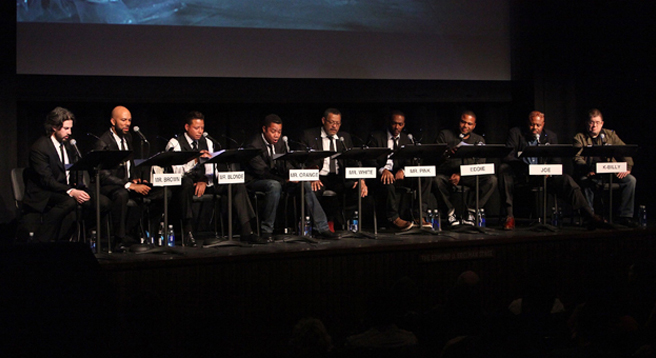 The two stand-outs in the performance undoubtedly were Howard as the homicidal Mr. Blonde (originated by Michael Madsen) and Cuba Gooding Jr. as Mr. Orange, the undercover cop played by Roth in the 1992 film.

Gooding had the broadest spectrum of emotions to play – stark panic at being shot, the stress and pressure of having to pass as a crook to gain access to the heist, stern determination as he tries to keep the bust going, even while wounded, and the affection he forms for Mr. White, his protector as he lay dying, despite the man’s status as a lifelong criminal. As Gooding’s Mr. Orange began to doubt what he was doing, Fishburne’s Mr. White remains stalwart in support of the partner he (mistakenly) trusts.

Then there was Howard, whose willingness to take long, tension-inducing pauses, and apparent memorization of many of his lines, allowed him to create a character who moves at an entirely different speed from what fans of Reservoir Dogs have seen before. While White, Orange, and Pink blustered and fought, Howard’s Blonde remained cool, calm, and collected – rarely raising his voice above a whisper.

When he faced down Mr. White’s gun and says, “Are you gonna bark, little doggy, or are you gonna bite?” the audience first grew deadly quiet – then cheered as White backed down.

It wasn’t a lack of energy – on the contrary, the hushed approach made Howard seem like Hannibal Lecter compared to Madsen’s ear-chopping schoolyard bully. “Alone at last …” he cooed, almost romantically, to the tied-up cop, played by Common in the seat beside him.

“I don’t know anything,” Common said. “You can torture me if you want.”

Howard smiles. “Thank you,” he said, almost sweetly, in the man’s ear. Then the character takes out a knife and begins carving.

In Mr. Blonde’s last stand, falling in a hail of gunfire in the moment he’s about to incinerate the gasoline-soaked cop, Howard cracked a wide smile and broke character as the crowd in the theater applauded. “Aw, I wasn’t ready to die yet!”

Reitman, who narrates the scripts by reading the stage direction, jokingly changed course: “For a moment, Mr. Blonde apparently dodges a few bullets, but THEN …!”

The story is the story – even if the audience wasn’t ready to see that Mr. Blonde go either.