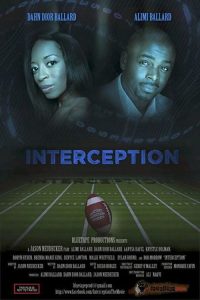 Synopsis: INTERCEPTION is a comedic and endearing homage to Christopher Nolan’s INCEPTION. Though in our tale we are not in a harried chase to stop a Global Energy Giant from world Domination. Instead it’s a Beleaguered Wife’s final attempt to stop Football from taking over her family life through her sports crazed Husband. The question is…how many levels down must we go? Women everywhere will sympathize and cheer!

Note: Premiered at the San Diego Black Film Festival in February Jan. 26 – 29, 2012. Trying to find an exact date. Above is the premiere date from the Hollywood Shorts Festival on March 18, 2012.