Last March, Screen Rant got an opportunity to visit the set of the new film When the Bough Breaks. The drama revolves around a married couple who seek out a surrogate mother so they can have a child. They find one in the form of Anna (Jaz Sinclair), but things don’t go according to plan. As her pregnancy progresses, Anna becomes more and more obsessed with the soon-to-be father (Morris Chestnut).

During the visit, we spoke with Sinclair about the nature of the Anna character, landing such a key role in a major project, and working with industry veterans Chestnut and Regina Hall.

Is this your first big project?

Can you talk about your character?

JS: Well, Anna Walsh is complex. There is a lot to this character. 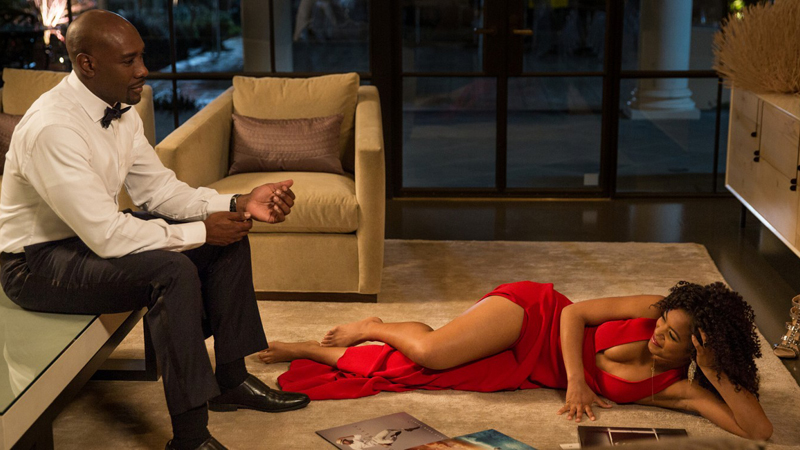 Can you talk about why she wanted to be a surrogate?

JS: Originally I thought it was because of her boyfriend. I thought that he had forced her to do it. That was the idea that I came into this wiry. Then I went to visit a surrogacy office because I was curious of what it would actually feel like and I walked in and they were so nice. They were so kind and it wasn’t dark like the movie. It was really happy. I talked to the people and they were kind to me. They gave their card and was like, “If you ever want to donate your eggs, come back.” I asked them and they said the prime candidate for an egg donor or surrogate is someone who in their 30s, had their own kids, doesn’t want to get pregnant again but loves being pregnant. I was like, “Why on earth would they pick this girl who is 20 years old and never had a kid to have their baby?” I realized it comes from a true authentic place and when Laura sees this girl for the first time, she can see this power behind this desire to help somebody. It comes from a genuine place. It comes from a desire to be able to help and to have the ability give something to someone.

Then she just go around and test her hormones…

JS: That has something to do with it. It’s really an unfolding of events and my perspective. There’s no malicious planning. Not much. It’s mostly a series of triggers that keeps triggering this girl in different ways and how to make her switch for the worse.

Do you think she will be crazy the entire time?

JS: That was the biggest thing. When one read the script, it’s action packed and there is a lot of stuff. A lot of exciting things that happens from this character and the main thing that I wanted to do was make her human. To ask questions. Why is she doing this thing? Instead of letting myself be shocked by the script and judging the character, I had to ask myself why and allowing her to.unfold as a true human being versus an idea. Versus of putting her in the crazy box. I built a person who is whole and broken who at the same evolves as the story evolves. That’s my favorite. You never quite know who this girl is because she changes as the story changes. It’s going to be fascinating to watch. 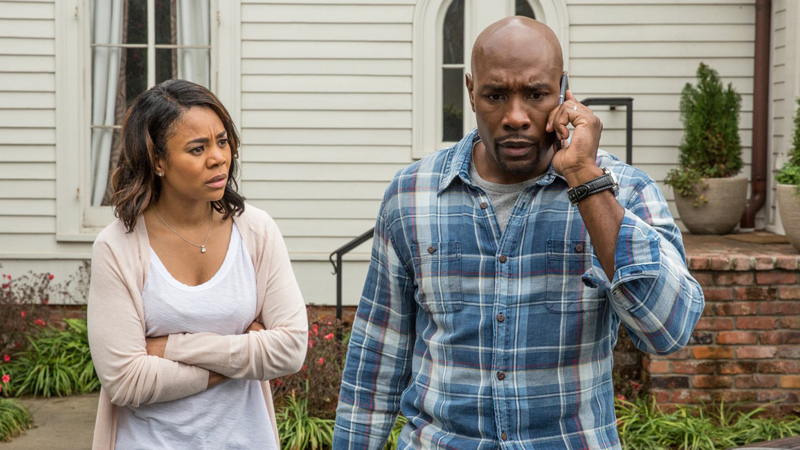 JS: So fun. So much fun. I swear we laugh everyday. It’s been such a good time. Regina is so funny and so much fun to be around; and she’s very motherly in our characters and to have someone who’s been in the business longer than I have is really a nice thing. Morris is such a gentleman. He’s such a kind person. He has such a kindness that it almost took me back when I met him. He’s kind and gentle. He’s perfect for this story. To have that kind of trust with your co-stars is important.

Does it make hard?

JS: No, it makes it fun. It’s actually fun and we joke about it. I’m always smiling on the days when I’m watching him in the makeup trailer get all bloody up. I love it. It makes it easier. It makes it better to have someone I can trust so when I turn a switch and become a different person and go a little crazy. It’s ok because we’re friends.

The director was telling us that you have the ability to turn from a good girl to evil, so where do you find that?

JS: I get that question a lot. I don’t know how to answer that. This girl just comes through me. She lives through me. It’s not me but I can see through her eyes very clearly when I need to see through her eyes clearly. I don’t know what happens. It’s kind of wonderful. I’ll be me one minute and then I’ll switch something in my brain and then I can see the whole world as her. I don’t really know how that works. I don’t think there’s any science to that. It’s just magical.

JS: Probably a ton. I really don’t know how to answer that question. There’s more that the character has taught me on a personal level. Mostly, the best way how to do something is to just do it. Thinking about the character will only take me so far, but actually doing the scene is how it do the scene. Taking things one day at a time and letting it evolve as it will evolve and just not having time to be scared of what this role requires. I didn’t have time to be scared. I was scared before I got here and I then I do it to the best of my ability. i learned how to let go and trust and not be too far in the future. It’s more that I learned things personally through the process of having to go back and forth between the different sides of Anna and then go home and be Jaz and then wake up and do it all over again with not much sleep. So, it’s more been a lesson of working hard and still honoring the work. 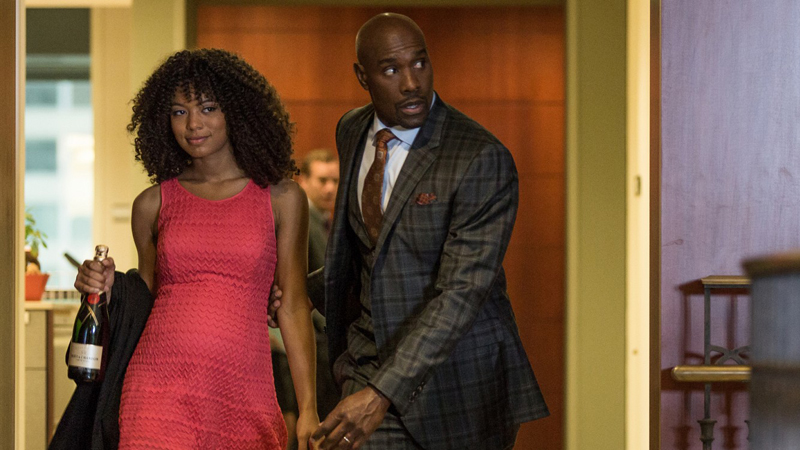 What about things you learned from Morris and Regina? Have they given you tips along the way or anything like that?

JS: I think the thing that I’m most grateful for in working with Morris and Regina is just seeing how kind you can be to people. Just seeing how you can be effective and create a positive environment and make people laugh and be kind to people and how you can a whole difference and overall feeling in the picture when you come to work with a good attitude. Just seeing people like Morris and Regina who have done so much and who are great at what they are doing and just see them be so humble and kind and consistent. I’m just starting and I’m so happy that they are my examples.

When was your first time performing in front of a big audience and when did you get this dream where you knew that this was something that you wanted to pursue as an actor?

JS: I think I have always been a performer a little bit in my heart. I was a gymnast and my favorite event was floor because I got to smile. I remember my first play and it was Footloose. I was High School Student #3 and we were doing the “Cut Footloose” number and I remember looking out in the audience and feeling happier than I ever felt. The feeling of performing in that moment and “This is the most fun I have ever had” and I was High School Student #3 and I knew that there was something to be found there.

There’s talk of how New Orleans is a character as well in this film. Can you talk about working in New Orleans? Have you guys hung out or done anything here?

JS: This is new. We actually haven’t have too much bugs out here. I liked doing this particular film in New Orleans. It’s kind of dark in New Orleans and it has this thickness to the culture and I think that living in that thickness translates into the script and I like that.

Can doing a film like this be exhausting because it requires so much physicality?

JS: That pretty much nails it. 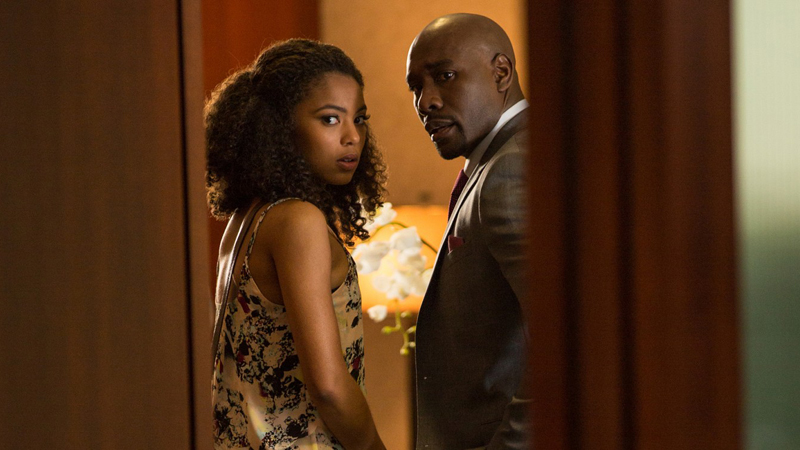 Did you get a chance to visit New Orleans?

JS: A couple of days and I have used them pretty well. Mardi Gras was right outside my window and there was no avoiding that. It’s just there. It was just great. I saw some museums and swamp tours. It’s been good. Mostly, I have just been trying to sleep on my time off. New Orleans is a great city. My favorite part is the music. I love being to walk on the street and dance with strangers. It’s really fun.

You said that Regina was really kind. Did that make it difficult when it came time to kick her butt?

JS: Yes. It’s interesting because Morris is kind and I also have to be crazy towards him. I did feel bad with Regina when I had to be crazy with her and had to look at her as Anna. I felt bad and I don’t know why.

How was doing the physical intense scenes with the fake belly? Was it hard to maneuver with it?

JS: No. It’s like a balancing act. So we’re in these super heightened and there’s all this stuff going on and there’s all these emotions and you have to do all these physical stuff, and don’t forget that you’re six months pregnant. It’s been trying to remember how pregnant I am and bellies feel different and they are all made out of different stuff, depending on what we need. But I liked the physical stuff. That’s fun for me. I love it.

Any projects coming up?

JS: My next project is sleep.