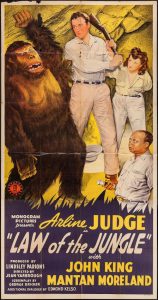 Synopsis: Nona Brooks, former member of a stranded theatrical troupe, earns a temporary living singing in a café in Duakwa, British Rhodesia, Africa. The café owner is secretly in league with two foreign agents with a goal of making the natives restless. American explorer Larry Mason leaves for the jungle with his servant, Jeff and a safari. Nona escapes the café into the jungle but is followed by the agents as, unknowing to her, she is carrying a report of the agent’s activities. She joins the safari just as all hands are captured by a tribe of natives.

Note: I didn’t find a trailer for this film.