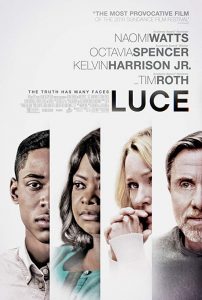 Synopsis: Luce is an African teenager and former child soldier now living with loving adoptive American parents in a suburban community. A star athlete and top student, Luce’s idealized image is challenged by one of his teachers when his unsettling views on political violence come to light, putting a strain on family bonds while igniting intense debates on race and identity. READ REVIEW

Note: Premiered at the Sundance Film Festival on January 27, 2019. Above is the theatrical release date.