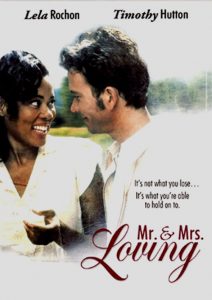 Synopsis: In the American South, a black woman and the white man she loves are hounded by racist police and inflexible family members. Mildred “Bean” Jeter (Lela Rochon) and Richard Loving (Timothy Hutton) have fallen hard for one another, but an antiquated statute still in effect in the 1960s says that their relationship is against the law. Their fight to forge a life together puts their freedom at risk as they wage a legal battle that takes their case to the Supreme Court.