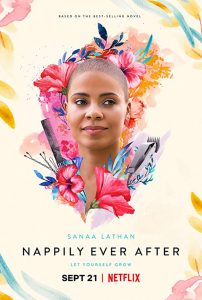 Synopsis: Nappily Ever After centers on Violet Jones, who has a seemingly flawless life until an accident at the hair dresser causes things in her life to unravel and she begins to realize that she was living the life she thought she was supposed to live, not the one that she really wanted. She starts to put the pieces back together with a little help from a soulful barber and his young daughter. Violet finds the courage to cast off some of the things that she didn’t really need, starting with the perfectly straightened hair, and find a life that has real meaning.

Note: Film will premiere on Netflx.