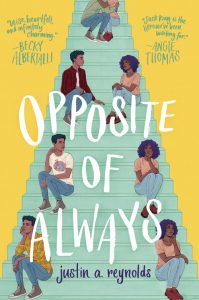 Synopsis: Opposite of Always (the book) follows Jack and Kate who after meeting at a party, bond until sunrise. Jack is falling hard for her, and soon Kate is meeting his best friends. But then Kate dies. Yet Kate’s death sends Jack back to the beginning, the moment they first meet, and Kate’s there again. Healthy, happy, and charming as ever. Jack isn’t sure if he’s losing his mind. Still, if Jack has a chance to prevent Kate’s death, he’ll take it. Even if that means believing in time travel. However, Jack will learn that his actions are not without consequences. And when one choice turns deadly for someone else close to him, he has to figure out what he’s willing to do to save the people he loves.