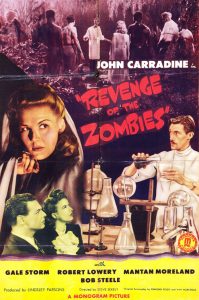 Synopsis: Scott Warrington and his hired detective, Larry Adams, arrive at an old mansion in the middle of a Louisiana swamp to meet his brother-in-law, Dr. Max von Altermann shortly after the death of Scott’s sister, Lila. Von Altermann, a Nazi who has been creating zombies for the armies of the Third Reich, has turned the deceased Lila into one of the undead as well, but is surprised when she shows signs of free will and challenges Max for control over his zombie thralls.