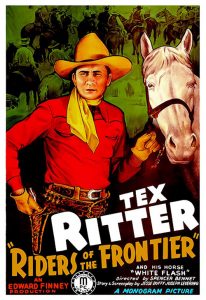 Synopsis: The Rancho Grande, a Texas border ranch, cut off from the law by a gang of outlaws led by ranch foreman Bart Lane, who is holding the elderly owner of the ranch, Sarah Burton, a prisoner. Tex Lowery,an undercover Texas Ranger, rescues Martha Williams, a nurse sent for by the ailing Sarah, from a stagecoach holdup by Lane’s henchmen. He later convinces Laner that he is a wanted outlaw named Ed Carter, and gains entry to Rancho Grande. But the real Ed Carter shows up