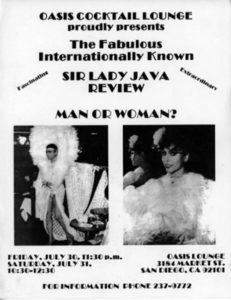 Synopsis: The story of onetime performer and long-time LGBTQ activist, Sir Lady Java. SLJ was a frequent presence on the Los Angeles nightclub circuit back in the 1960s. In that time of discrimination, she shared the stage with Sammy Davis Jr, Redd Foxx, Lena Horne, Richard Pryor and James Brown until the LAPD decided to shut her down in 1967 with what was known as “Rule Number 9.”

Release Date: Unknown | Length: Unknown | Genre: Biography, Drama, History | MPAA Rating: Unknown | Note(s): Original announcement. Above is a special presentation by Hemingway featuring Sir Lady Java and Hailie Sahar. Anthony Hemingway and Tameka Harris are producers on this project. There has been no update on this project for over I year. I will give it one more expiration before moving it to “Limbo” or “Never Made”.