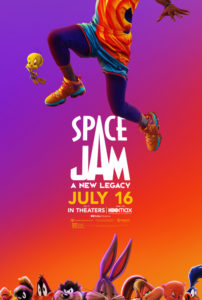 Synopsis: A rogue artificial intelligence kidnaps the son of famed basketball player LeBron James, who then has to work with Bugs Bunny to win a basketball game. READ REVIEW

Note: Film has been in development for some time. Justin Lin was originally attached to direct. I don’t see O’Shea Jackson Jr., Jared Sullinger or Tacko Fall in the current cast list. Terence Nance was replaced by Malcolm D. Lee as director on this project because “the filmmaker and the studio/producers had different takes on the creative vision for Space Jam 2″. There also seemed to be a shake up in the writers, which now includes Ryan Coogler. “Space Jam 2” title was changed to “Space Jam: A New Legacy”. Maverick Carter, Ryan Coogler, Zinzi Coogler, LeBron James, Terence Nance and Jamal Henderson are producers on this project.