Summer of Soul (…Or, When the Revolution Could Not Be Televised) (2021) 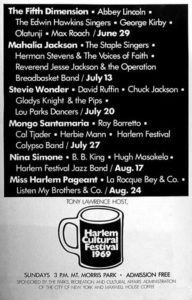 Synopsis: A feature documentary about the Harlem Cultural Festival. Held in 1969, the outdoor festival featured performances from some of the leading black musicians of the day — a group of heavy-hitters that includes Sly and the Family Stone, Stevie Wonder, Nina Simone, B.B. King, the 5th Dimension, David Ruffin, Mahalia Jackson, the Staple Singers, and Gladys Knight and the Pips. The festival took place one year after the death of Dr. Martin Luther King Jr, and was intended to celebrate African American culture and politics, as well as to promote black pride and unity.

It unfolded in Harlem’s Mount Morris Park during the same summer that Woodstock captured the attention of the world. Despite drawing over 300,000 people, the Harlem Cultural Festival received virtually no coverage from mainstream media, a staggering omission that Thompson’s film hopes to rectify. “Black Woodstock” will include 40 hours of never-seen-before footage originally shot by late television pioneer Hal Tulchin. It has remained in storage for half a century. The title of the movie is derived from the term that Harlem residents used to describe the festival. READ REVIEW

Note: Original announcement. I think the film was restored but it missed its 2020 release date. Title changed from “Black Woodstock” to “Summer of Soul (…Or, When the Revolution Could Not Be Televised)”. I will have to see the documentary to see if George Kirby and Pigmeat Markham are in the final cut. Premiered at the Sundance Film Festival in 2021.