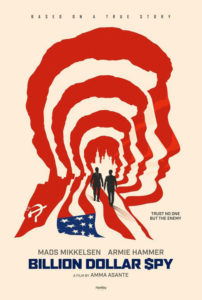 Synopsis: The Billion Dollar Spy is the true story of a man who became the Pentagon’s most valuable spy during the last years of the Cold War. Despite numerous rejections by a cautious CIA on the lookout for undercover KGB agents, Adolf G. Tolkachev, the chief designer at the USSR’s Research Institute of Radio Engineering, handed over tens of thousands of pages of highly classified documents to the U.S.

Release Date: Unknown (USA) | Length: Unknown | Genre: Biography, Drama, Thriller | MPAA Rating: Unknown | Note(s): There has been no update on this title since 2021. If no update by next expiration, I’m moving it to “Limbo”.