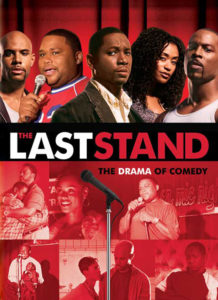 Synopsis: The Last Stand, a drama that chronicles the life of four very different people attempting success as performers in Los Angeles until life becomes too much to handle. They meet at a notable Hollywood comedy club, The Last Stand. While waiting for their sets their regular hangout spot is on the roof adjacent to the comedy club. There they form a bond and become fast friends. In dealing with the pressures of life and the industry they become a support unit for each other. Living life in the fast lane their lives start to crumble. As they get closer and closer to the edge, one tragic step ends the pain. Through the lives of Reggie, TD, Bo and Dede we see the drama of comedy.

Note: Gary With Da Tea appears as Darrin Dewitt Henson lover but is not listed in the IMDB credits.