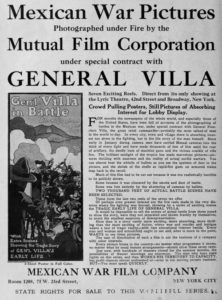 Synopsis: Vivid fighting scenes photographed under fire by Mutual cameramen under special contract with General Villa are the features of this motion picture. Many scenes are shown of the Battle of Torreon. They show the Constitutionalist forces advancing under fire with the shrapnel kicking up the dirt all around. Many other interesting scenes are shown of the artillery in action under fire, laying railroad track under fire and similar war time activities. General Villa himself, with his generals, appears in many of the scenes. The famous Constitutionalist leader is seen to good advantage. The old saying that “War is Hell” is well exemplified in the pictures showing the burning of the dead and other views of the seamy side of the conflict. Some of the battle scenes are shown as battle scenes. Other views of the actual fighting are worked into a film dramatization of the life of General Villa, which is preceded on the screen by a sub-title, “The Tragedy in the Career of General Villa.” This tells the story of Villa’s life as follows: Years ago, Pancho Villa was a young rancher living alone with his young sister and doing well. One day a young lieutenant of the Mexican Federal Army came to that locality with another young officer. The lieutenant became smitten with Villa’s sister, and with the aid of his companion, abducted her and ruined her. The sister, after telling her brother, died, and Villa journeyed to the garrison town and killed the lieutenant, but the companion escaped. Villa then sold his rancho and with a small body of his men escaped to the mountains, vowing warfare on all mankind in revenge for the death and ruin of his sister. He became a bandit, and by meeting and defeating other bandits, became the chief of a great band and the terror of the northern part of Mexico. He was particularly sore at the Federal Government, and when the revolution broke out, he sided with the revolutionists and their leader. Sallying forth from the mountains he blew up trainloads of Federals and met and defeated every Federal army that was sent against him, captured town after town and city after city. At the last great and decisive battle he met face to face the Federal officer who had assisted in the abduction of his sister and helped to start him on his road to banditry and outlawry and killed him with his own hands upon the battlefield. The Federals were defeated, and Villa is finally proclaimed president of the great Republic of Mexico, he who once was an outlaw with a price upon his head.

Note: I didn’t find a trailer. Above and below are clips from a documentary about the film that contain original clips from the lost film. Juano Hernandez has a generic role in the original film as a revolutionary soldier.