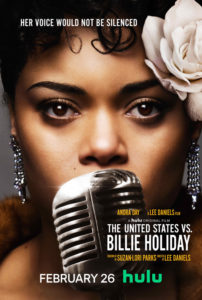 Synopsis: Follows Holiday during her career as she is targeted by the Federal Department of Narcotics with an undercover sting operation led by black Federal Agent Jimmy Fletcher, with whom she had a tumultuous affair.

Note: There is a documentary that was recently announced with the same title. Title changed from “Billie” to “The United States Vs. Billie Holiday”. Lakeith Stanfield was in the original cast list but isn’t currently. He may have been replaced by Trevante Rhodes. The February 12, 2021 release date was moved to February 26, 2021, replacing Tom Clancy’s Without Remorse. Hulu recently picked up this project so it might miss its release date.