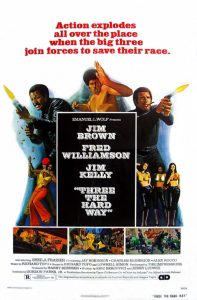 Synopsis: The story involves a white supremacist plot to taint the United States water supply with a toxin that is harmless to whites but lethal to blacks. The only obstacles that stand in the way of this dastardly plan are Jim Brown, Fred Williamson and Jim Kelly, who shoot, kick and karate chop their way to final victory.

Note: Could not identify Jan-Minika Hughes or Clyde McLeod. Minika’s character has no name in the film so watching the film didn’t help identify her and she also appears in Coffy with Pam Grier as a character named Billie but I never heard anyone say that name in that movie. Searching google took me to the party scene where the hookers are all fighting so she might be in that scene but there are too many girls to narrow it down to her. Clyde McLeod also appears in that scene as a party guest but there are a lot of guests.