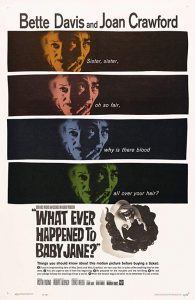 Synopsis: In a tale that almost redefines sibling rivalry, faded actresses Blanche and ‘Baby’ Jane Hudson live together. Jane was by far the most famous when she performed with their father in vaudeville but as they got older, it was Blanche who became the finer actress, which Jane still resents. Blanche is now confined to a wheelchair and Jane is firmly in control. As time goes by, Jane exercises greater and greater control over her sister, intercepting her letters and ensuring that few if anyone from the outside has any contact with her. As Jane slowly loses her mind, she torments her sister going to ever greater extremes.