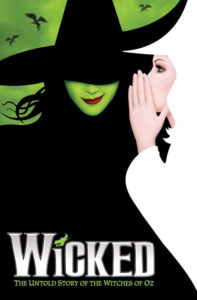 Synopsis: A vivid reimagining of the classic The Wizard of Oz, Wicked spotlights the untold stories of Oz’s most famous (or infamous) characters, namely the Wicked Witch of the West and her unlikely friend, Glinda the Good Witch. The show follows green-skinned star Elphaba from birth to college and through the life-changing events which eventually label her “wicked,” introducing spoiled rich girl Glinda, local prince and heartthrob Fiyero and even the Wizard of Oz himself, a troubled man very unlike the one you may remember. As Elphaba, a passionate political activist if there ever was one, fights injustice and seeks to undo the mistakes of the past, dark secrets and personal tragedies shape the history of Oz, paying homage to the classic Wizard of Oz story while simultaneously changing fans’ understanding of it forever. A cautionary tale about love, friendship and trust, Wicked effortlessly reveals that there are indeed two sides to every story.