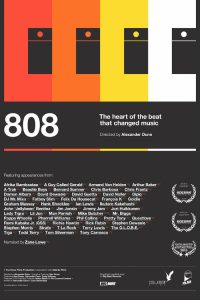 Synopsis: 808 is a documentary film about the inspiring story of the Roland TR-808 drum machine. It’s the tale of the birth of electronic music, and how one small machine changed the musical landscape forever… by accident. It’s the story of a sound that has been embraced by the world’s top producers and performers, and has been name-checked on a whole host of hit records. Associated with numerous musical styles crossing both time and genre, its defining sounds are as relevant now as they ever has been. It defined hip hop and modern dance culture and it’s sound continues to deliver dance floor smashing beats today.

Note: The feature length documentary will first be released worldwide exclusively via Apple Music on Monday, December 9th before being available in the iTunes Store a week later, alongside the official soundtrack release arriving on Big Beat Records (Shadow and Act).