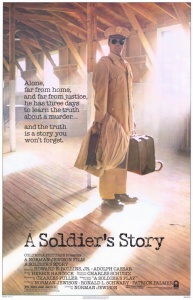 Synopsis: Tensions flare in this gripping film about a murder on a black army base near the end of World War II. Captain Davenport (Howard E. Rollins, Jr.), a proud black army attorney, is sent to Fort Neal, Louisiana, to investigate the ruthless shooting death of Sergeant Waters (Adolph Caesar). Through interviews with Sarge’s men, Davenport learns that he was a vicious man who served the white world and despised his own roots. Was the killer a bigoted white officer? Or could he have been a black soldier embittered by Waters’ constant race baiting? Directed by Norman Jewison from Charles Fuller’s Pulitzer Prize- winning play, A SOLDIER’S STORY is both a spellbinding mystery and a superb drama that transcends race.

Note: There is a Traftin E. Thompson Sr. and Jr. I can’t tell from the film which one is the one above. Both are from Arkansas where the film was made. Jr was in the military but not sure if its him and I don’t have any other films or tv shows to compare it to.