Sometimes it feels like Dwayne “The Rock” Johnson owns a cloning machine, because the guy is absolutely everywhere these days. He just appeared in the highest-grossing movie of 2015 thus far, Furious 7 (at $1.4 billion worldwide and counting), and he’s about to go for more box office gold on May 29th with a starring role in the earthquake disaster blockbuster San Andreas.

That alone would exhaust most stars, but for “The Rock,” that’s just getting warmed up. He’s also set to be a regular on the HBO original drama series Ballers, about the lives of pro football players after retirement. That series premieres in June, and looming on the horizon is his role as the villainous Black Adam in DC’s Shazam adaptation (which he says may come out before 2019), as well as a reprisal of the heavy machine gunner Roadblock in G.I. Joe 3.

Now, according to a THR report, the WWE superstar turned action icon is attached to star in an exciting sci-fi action comedy film for Dreamworks that draws comparisons to Guardians of the Galaxy, Independence Day and Armageddon.

Alpha Squad Seven is the name of the project conceived by writers Jeremiah Friedman and Nick Palmer, and it was acquired by Dreamworks after they “acted aggressively” to nab the rights in a bidding war with other studios, including Paramount. Producer Beau Flynn, who has close ties with Dwayne Johnson after working closely with him on films like Journey 2: The Mysterious Island and last summer’s Hercules, will produce the film under his Flynn Picture Co. banner along with Johnson and his 7 Bucks company. 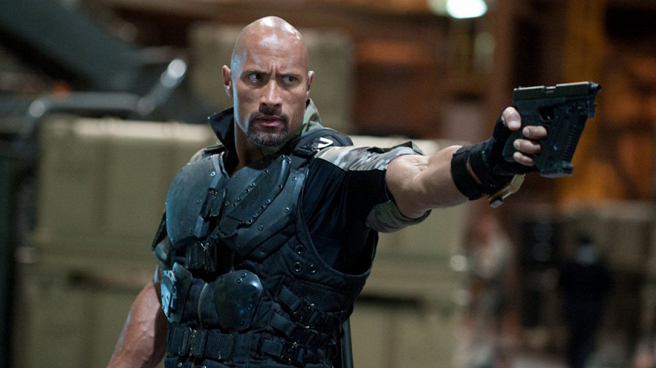 Described in the THR report as a potential franchise starter and “a four quadrant action-comedy adventure set in space,” Alpha Squad Seven seems like an opportunity for Johnson to show off his natural charisma (and flex his muscles, of course) in a Star-Lord-like role, as well as conquer yet another box-office arena. Outer space sci-fi isn’t a realm that Johnson has had much success in, with 2005’s lackluster video game adaptation Doom being his only real foray into the stars, but his drawing power and pedigree wasn’t nearly at the levels it is now – especially coming off the huge success of the Furious films.

If the Guardians of the Galaxy “watchwords” cited in the THR report are any indication, Dreamworks will have to be very careful with Alpha Squad Seven. When Marvel struck gold with Guardians‘ surprising blend of heart, Star Wars-esque space opera, memorable characters, and Marvel Comics superhero elements – rival studios were likely anxious to snap up similar concepts and rush them into production. Star Wars launched a thousand imitators throughout the late ’70s and early ’80s, but none of them could bottle the “magic” of that galaxy far, far away, so Dreamworks will have to work hard to ensure Alpha Squad Seven can stand apart and not just be a soulless rip-off.

Still, if the film packs enough action, witty dialogue, and plays to Johnson’s strengths – namely his beaming smile, great comedic timing, and incredible physicality – it could be the start of an original, crowd-pleasing adventure franchise that he could have all to himself.  Of course, a strong supporting cast, top-notch director, and some spectacular special effects will go a long way as well. We’ll have to watch the development on Alpha Squad Seven closely to see how it comes together.