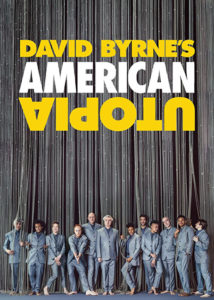 Synopsis: The film version of the Broadway show “David Byrne’s American Utopia”. The play features the Talking Heads co-founder accompanied by 11 musicians from around the world performing songs from Byrne’s 2018 album American Utopia as well as hits from his Talking Heads and solo periods.

Note: To be an HBO production. Original announcement. The film is set to premiere at TIFF ’20. Also known as “David Byrne’s American Utopia”.