Andre Holland Addresses An Unresolved Part Of Our Cultural Heritage

In The Knick, Andre Holland plays the marginalized Dr. Algernon Edwards, battling prejudice in the Knickerbocker hospital in early-1900s New York. The Steven Soderbergh-directed period drama not only covers racial and societal issues, but also delves into drug addiction, the hit-and-miss gore of early medical practice and Dr. Edwards’ relationship with the boss’ daughter Cornelia (Juliet Rylance). Renewed for season two before the first had even aired, Holland says, “People who liked the love story last year, will like the show even more this year because it goes even further.” Holland also dove head-long into political and racial issues as Andrew Young in 2014’s Selma. Of choosing these roles Holland says, “These are things that are still sort of an unresolved part of our cultural heritage.”

Apparently you got a hotel housekeeper to make your audition tape for The Knick?

It was madness. I got the audition, and I was in Italy so I grabbed the housekeeper and asked her if she could read the off-camera lines for me. That didn’t go so well, so I wound up like sitting in the lobby and I ran into this English couple who were there on their honeymoon, and somehow I convinced the man to allow me to bring his wife to my hotel room to have her read the off-camera line. It was quite an adventure.

Obviously it’s Steven Soderbergh, but what else attracted you to The Knick?

Well the fact that it was a black character, in that time period, who wasn’t just an entirely noble character, but he was a really well-developed, three-dimensional character, who had a love interest, and he also had a profession, which he’s very good at, but then at the same time he had a very rich and volatile emotional life. In other words, he just felt very human to me, and that isn’t always the case frankly, when you read characters of color. In this case it was like a real guy, and you know, as I read the script there was so many scenes that I just couldn’t wait to play. That kind of a feeling is rare.

Obviously both The Knick and Selma are period pieces handling racial issues – what’s compelling for you about tackling those roles?

I was brought up in Birmingham, Alabama, and so I was raised very much aware of the American Civil Rights Movement, and in a city that is still dealing with some residue of that. The other thing that I think tends to lead me to those parts is the fact that these are things that are still sort of an unresolved part of our cultural heritage, you know, I mean when you look at all of the things that are happening now, in and around the US. That is obviously something that’s still unresolved, and so it seemed like a part of my job, part of my mission, as an actor, to help to shed light on some of those situations in people’s lives, and to lend my voice to it. I do feel that in some small way, by playing characters that are upstanding characters, who are real people at the same time, and those who have really strong points of view, I think that’s my way of sort of contributing to the change that we need in our country. Those kind of characters just really speak to my soul and to who I am as an African American man right now. 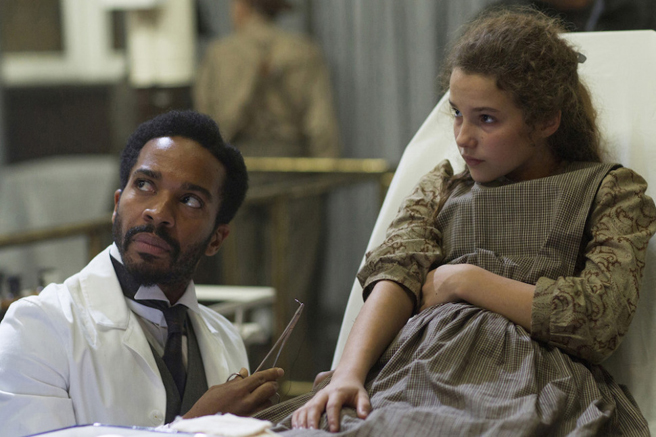 “We all went in knowing that we were going to work with one of the great directors of our time,” Holland says of working with Steven Soderbergh

At the end of season one your character falls apart on his lover’s wedding day. Any hints at how he’s going to come back from that?

It was quite devastating last year, and the early episodes (of season two) are about how to move forward. What they come to is, I think, a place that neither of them, no anyone else in the hospital, expected, and that’s all I’ll say, but believe me when I say it’s going to be good.

Algernon is very steady and gracious – what did you draw on to give him that grounded quality?

In my life, you know, there have been a number of times, a lot of times, most of the time frankly, I’m the only, or one of very, very few people of color in a lot of places. You know, school, graduate school, or undergrad, or high school even, grade school. I mean I know what it feels like to be the only one, you know, and I think that comes with a certain amount of responsibility, frankly, and that’s something that I think Algernon knows very, very well. I think that elegance and grace that he has comes from his upbringing. He has a great appreciation for the sacrifices that his parents made to give him the opportunity, and I think he also has a really high opinion of himself, and of his ability, and wants desperately to be taken seriously, and I don’t think that he would even want to do anything, or behave in any way, that would undermine any opportunity that may come his way, so I think it is absolutely a choice, on his part.

How was the experience of working with Soderbergh?

We all went in knowing that we were going to work with one of the great directors of our time, so, there was a certain amount of nerves. But he knows exactly what it is that he wants, and once he’s got it he doesn’t feel the need to waste time or energy doing things over and over again. He forces his actors to make really strong choices. You can’t come to work and be dependent on him to tell you want to do. You have to make those choices before you turn up, and if you don’t make those choices then when you turn up the train will be leaving the station without you, and that just speaks to the pace in which he works. I mean we cover anywhere from eight to ten, 12, pages a day. I don’t think there’s any other director who can work at that pace and maintain the level that he maintains. To me, he’s the best.

Are you squeamish? How do you handle the gore on the show?

The blood didn’t really bother me. The one thing that did bother me was when I had to sleep next to that cockroach. It was this cockroach crawling on a pillow, next to my face, and I had such anxiety about that scene, because literally you’re there with your eyes closed, and the cockroach is right there, he can go anywhere. You know you look over at Steven Soderbergh there with the camera, and the last thing I want to do is to slow him down or be a problem in any way, so I was just like, “Yeah. I’m okay. I’m cool with a cockroach. Bring him on.” Of course inside I was about to wet that bed.