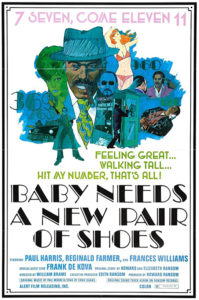 Synopsis: It’s a turf battle over the mean streets of Harlem between Italian mobsters and the black hoodlums living in the neighborhood run by “Big Tony” (Frank DeKove). The fighting becomes intense as each side tries to push the other out, with both groups bringing in their best hit men. Watch for a brutal transvestite mobster who kills with her high-heeled shoes.

Note: Also known as “Jive Turkey”. There are some people I couldn’t identify because they had generic character names and this was their only role. IMDB credits the wrong Lester Matthews with playing the role of Mr. McDonald. Having trouble identifying James T. Jackson (Raphael). When Pasha says he’d hungry, Mama Lottie calls Raphael to make him something to eat. He answers, but you never see his face. When Pasha leaves and gets in his car, he tells the driver to drop Raphael off somewhere but only Pasha, Jimmy and Willie (the driver) are in the car. When they get to the meeting spot, there is a cook there but his name is not mentioned. A few minutes later a man enters and Pasha calls him Raphael but you only see his back. When the scene moves to another camera angle, that man is not in the room.