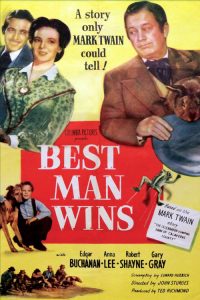 Synopsis: Jim Smiley has a frog that can jump further than anyone else’s frog, and Jim becomes obsessed with entering the frog in all of the local jumping-frog contests, not realizing that his obsession is about to cost him his marriage.

Note: There are other black people seen on the dock but they are uncredited and don’t have speaking lines. Missing trailer.