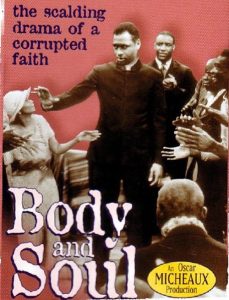 Synopsis: An escaped prisoner seeks refuge in the predominantly African American town of Tatesville, Georgia, by passing himself off as the Rt. Reverend Isaiah T. Jenkins. He is joined in town by a fellow criminal, and the pair scheme to swindle the phony reverend’s congregation of their offerings.

Jenkins falls in love with a young member of his congregation, Isabelle Perkins, even though she is in love with a poor young man named Sylvester, who happens to be Jenkins’ long-estranged twin brother. Jenkins steals money from Martha Jane, Isabelle’s mother and convinces the young woman to take the blame for his crime. She flees to Atlanta and dies just as her mother locates her.

Before dying, Isabelle reveals to her mother that Jenkins raped her and that he is the one who took her mother’s money. She explains that she didn’t speak up before because she knew her mother wouldn’t believe her. Returning to Tatesville, Martha Jane confronts Jenkins in front of the congregation. Jenkins flees and during a twilight struggle he kills a man who tries to bring him to justice. The following morning, Martha Jane awakens and realizes the episode with Jenkins was only a dream. She provides Isabelle (who is not dead) and Sylvester with the funds to start a married life together.

Note: Missing trailer. Above is a clip from the film.