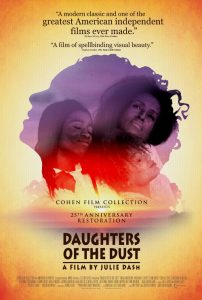 Synopsis: Languid look at the Gullah culture of the sea islands off the coast of South Carolina and Georgia where African folk-ways were maintained well into the 20th Century and was one of the last bastion of these Mores in America. Set in 1902.

Note: The movie was re-released in theatres on November 18, 2016 to celebrate it’s 25th Anniversary by Cohen Media Group, who restored the film in HD. The trailer above is from the restored version of the film.