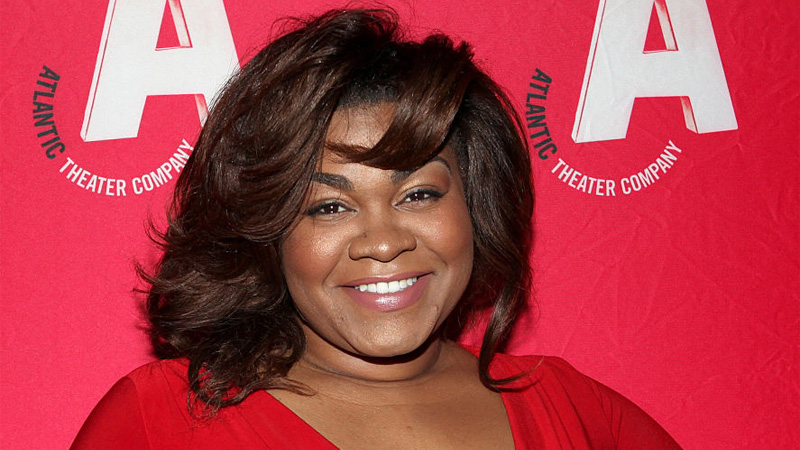 Aramide A. Tinubu | Shadow and Act

In the 1970s, comedian Rudy Ray Moore was forcefully pushed out of entertainment. Though he’d seen some minor success with a few albums and some work in comedy, doors quickly closed in his face. Against all rational sense, and with the money that he was able to piece together from family and friends, Moore reinvented himself as the character Dolemite, garnered major attention on the comedy stage and eventually made his own Blaxploitation film, Dolemite, off of the strength of his own tenacity.

Amid his come up, Moore met Lady Reed. She became his protégée, subverted Black female stereotypes of the Blaxploitation era and appeared in several films including Dolemite along with him. Now, Eddie Murphy along with Tony Award-nominated actress Da’Vine Joy Randolph, have immortalized Moore and Reed on the big screen with Netflix’s Dolemite is My Name.

At the 2019 Toronto International Film Festival, Shadow And Act sat down with Randolph to talk about becoming Lady Reed, working with Murphy and the stunning costuming from the hands of the legendary Ruth Carter. 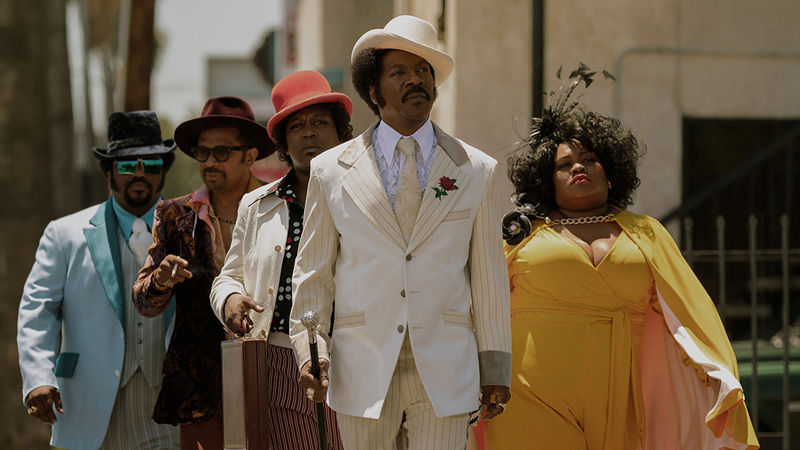 “I had heard about the audition, and I was talking to my dad,” Randolph recalled on first learning about Rudy Ray Moore and Lady Reed. “I was like, I got this audition, for this movie, Domino. My dad was like ‘Dolemite?!’ He was like ‘Wait a minute, tell me you’re going in for Lady Reed.’ I was like, ‘Yeah, that’s the lady.’ He schooled me from there. I quickly did my research and was like, ‘Oh wow. This is a whole subculture, a whole complete history.’ I feel as though we have a responsibility as entertainers–especially people of color or any niche group to tell these kinds of stories. I think it is vital that we hear stories of slavery and street gangs. It’s equally as important, but I just feel like there is a vast culture and history of people that we just don’t know.”

When we first see Randolph’s performance of Lady Reed in the film, she’s going through some pain and trauma. However, Rudy (Murphy) recognizes something powerful and exquisite within her. “If someone sees you, really sees you and there’s no judgment, that’s everything,” Randolph explained. “What I thought was cool about that opening scene, in particular, was that she’s not broken. I think that’s so profound–she’s not some broken Black woman. If anything else, she’s a strong woman because she’s deciding in 1972 as a Black woman to leave her man. She is choosing to be a single mother because she loves herself more than to put up with cheating and abuse. I was like, ‘Oh okay, this is a special type of woman. This is a queen.’ We’ve all been there, where you’d rather put yourself in an uncomfortable situation for right now because you know and believe that what you’re going to get is even better.”

As Rudy’s protégée, Lady Reed finds herself in the male-dominated comedic world amongst Rudy and his friends. “She’s never broken,” Randolph reflected. “She’s learning, and she’s frustrated at times, but she’s learning how to move in this world, to move in this world of men. What’s so admirable is her resilience. She finds the life and fun of the process, and I think that’s just a good rule of thumb. Director Craig Brewer, Eddie and I talked strategically that we wanted the audience to see her glow up. If you observe the movie, you see in each scene that her outfit gets a little bit better, the hair gets a little bit better. As a Black woman, when the inside feels good, it starts to reflect on the outside.”

When it came to understanding who Lady Reed was at her core, Murphy was Randolph’s greatest resource. “Eddie knows this world in and out,” she revealed. “There wasn’t much research on her, which was very interesting. I’m on a personal journey of unpacking that now. My biggest thing was watching her movies to see how she moved and her mannerisms. Then in one of my callbacks, they had given me one of her party albums and part of my callback was to memorize two minutes of her standup. That was really difficult, and I had to do it in a very short amount of time. It was a challenge, but it ended up being the exact challenge I needed because that was truly the cornerstone of my whole process.” 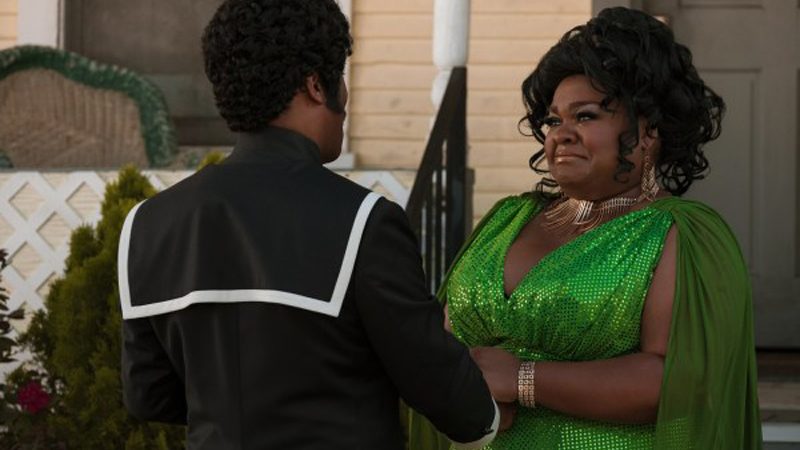 Randolph continued, “Even when filming if ever I got lost, I would just go back to that standup to reset. In between, I would get a lot of my stuff from Eddie or Eddie would share, ‘When I saw her, she did this.’ Or, there are certain lines that he added just on the cuff. He was like, ‘I remember one time, she said something like this and I thought it was so funny. Say that!’ Eddie Murphy is a genius. We all knew that, but watching the process–his mind is set up in a way that is different from other people. I think that is why he can juggle five or six characters. I think with that, that’s why all of his characters have such depth and wealth to them, and they’re so rich because he respects and devotes a lot of time to making these fully realized characters. He’s not selfish; he was very generous with me with his time, his talent, and his wealth of knowledge. He came with so much love and passion to this project.”

When it came to stepping into Lady Reed’s attire, Randolph was aided by Oscar-winner and legendary costume designer, Ruth Carter. It was an experience that the Philadelphia-born actress will never forget. “When I came to my first fitting, they were like, You’re going to meet a woman named Ruth,’ but they didn’t say her last name,” she remembered. “When she came around the corner. I just started crying. As a woman, as a Black woman, as a curvy Black woman, I’ve done projects where I’ve had to just accept ‘These are my clothes.’ But to know that you’d be taken care of in such a way–and to be the only woman. I felt pressure like, ‘Lord, I have to carry the ’70s as a woman on my back for the culture.’ To be able to know not only is she going to handle it, but she’s going to put that extra sparkle in it. Everything was custom made. She went and pulled vintage pieces –we pulled the fabrics. It was really fun to create.”

Along with watching Lady Reed on film and listening to Murphy’s recollections about her, the clothing truly allowed Randolph to become her character. “Ultimately, the clothes let you know how you walk and how you move,” she explained. “If you’re in a fly jumpsuit or if you’re wearing a dope kaftan, for me it greatly informed and let me know, this is a woman. She is a lady, and she enjoys clothes, and she enjoys representing. Working with Ruth was just another crucial tool in the acting process of filling in the blanks in a really amazing way.”

As the film was set to premiere at TIFF last weekend, Randolph was reveling in the moment. “This was a very special moment so it was like, I wanted to absorb as much as possible,” she shared. “I think they did an excellent job while casting and it came together beautifully.”