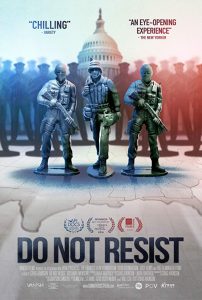 Synopsis: An urgent and powerful exploration of the rapid militarization of the police in the United States. Starting on the streets of Ferguson, Missouri, as the community grapples with the death of Michael Brown, DO NOT RESIST – the directorial debut of Detropia cinematographer Craig Atkinson – offers a stunning look at the current state of policing in America and a glimpse into the future.

Note: Premiered at the Tribeca Film Festival in 2016.