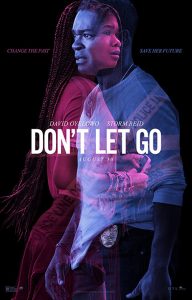 Synopsis: After a man’s family dies in what appears to be a murder, he gets a phone call from one of the dead, his niece. He’s not sure if she’s a ghost or if he’s going mad, but as it turns out, he’s not.

Note: Premiered at the Sundance Film Festival on January 27, 2019. Above is the theatrical release date.Title changed from “Only You” to “Relive”. David Oyelowo is an executive producer on this project. Brian Tyree Henry is listed in the cast in an article from THR but is not in the IMDB cast listing. He is mentioned in IMDB’s Sundance Film Festival interview with the cast of the film and appears in the latest trailer. The title was changed again from “Relive” to “Don’t Let Go”.