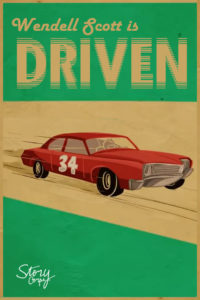 Writer(s): Based on interviews with Frank Scott and Warren Scott

Synopsis: NASCAR driver Wendell Scott began his career in the South during the Jim Crow era in 1952. His son and grandson remember what it was like for Wendell as one of the first African-American drivers in NASCAR. They describe him as exceptionally talented and driven, “like Picasso—a great artist doing his work.” Despite receiving death threats and having first-place accolades consistently stripped due to institutionalized racism, Wendell persisted. His motto: “When it’s too tough for anybody else, it’s just right for me.”

Click here to listen to Frank and Warrick Scott’s StoryCorps interview. Watch Wendell Scott’s son and grandson discuss his career and legacy on Coffee With Kyle from Motorsports on NBC.