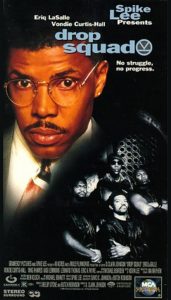 Synopsis: Political satire about an underground militant group that kidnaps African-Americans who have sold out their race. The story follows as the group led Curtis-Hall and Rhames kidnaps an advertising executive (La Salle) who has been providing advertising programs that belittles blacks and women. One advertisement features Spike Lee endorsing Gospelpak Fried Chicken which comes in a bucket with the Confederate flag draped all over it.

Note: Donna Briscoe isn’t the actress from Hidden Figures. Not sure if Joanna Maddox is the same one as the singer/playwright. Need to watch this film again to better identify people.