Drugs as Weapons Against Us: The CIA War on Musicians and Activists (2018) 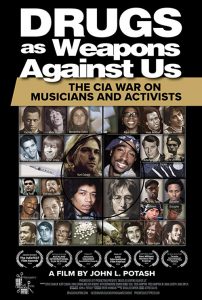 Synopsis: Drugs as Weapons Against Us presents evidence that the CIA’s Project MK-Ultra manipulated musicians and activists to promote drugs for social control, particularly regarding the Civil Rights and anti-war movements. Evidence further supports that intelligence agents murdered some of these musicians and activists when they resisted intelligence manipulations. U.S. intelligence targeted musicians such as Tupac Shakur, Kurt Cobain, John Lennon and Jimi Hendrix, as well the anti-war SDS and The Black Panthers. America and Britain’s wealthiest families had a history of drug trafficking and opium wars against China. The American families’ benefactors then elicited the CIA and Pentagon’s aid in launching America’s longest wars in the top heroin-producing poppy field regions of Vietnam and Afghanistan. The CIA also focused their covert operations on control of the top cocaine-producing regions in Central and South America. The CIA further used LSD and other drugs to divert anti-war movements.

Note: A lot of people are featured in this documentary. I only listed the names of the people heard speaking if I could identify them.